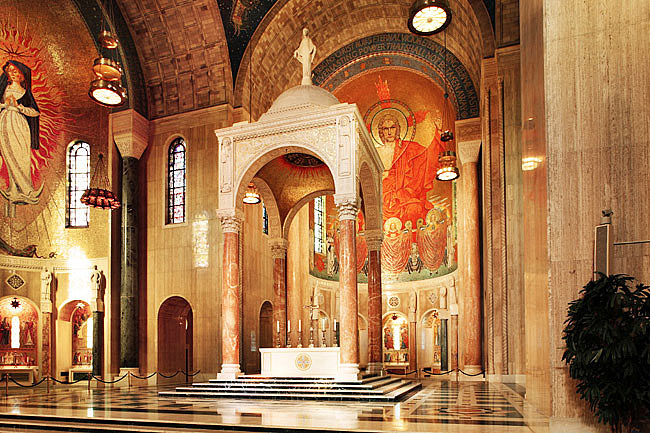 Conference participants arrived in Washington with accommodations at the Washington Court Hotel and were welcomed to the National Shrine. They enjoyed open bench access to the Gallery Organs of the Upper Church, attended Daily Mass in the Crypt Church, and toured the basilica before the meeting officially opened with Evening Prayer in the Crypt Church. The Reverend Monsignor Walter Rossi, Rector of the National Shrine, presided over Evening Prayer; the Reverend Monsignor Charles Antonicelli, Vicar for Canonical Services of the Archdiocese of Washington, delivered the homily; and Peter Latona, Richard Fitzgerald, Benjamin LaPrairie, and the Choir of the National Shrine provided the liturgical music.

The day began with the Reverend Robert A. Skeris presenting a lecture titled: “Laus Vocalis Necessaria: The Music Must Pray, the Prayer Must Sing.” Father Skeris shared reflections on the necessary integration of musica sacra with the Logos in the liturgy: “Chant and liturgy have one nature; they belong together like belief and prayer.” Father Skeris currently serves as Director of the Center of Ward Method Studies at the Benjamin T. Rome School of Music at the Catholic University of America (CUA). From 1986 to 1989, he served as Professor and Prefetto della Casa at the Pontifical Institute of Sacred Music in Rome, Italy.

After the lecture, the day continued with a tour of the Blessed John Paul II Institute. The Institute is owned and operated by the Knights of Columbus and is currently under renovation. Jem Sullivan, Director of Research at the Institute, led conference participants through several exhibits, including a biographical exhibit of the life of Blessed John Paul II, and an exhibit depicting the Election of Pope Francis and the process of the Conclave.

The conference participants met at 12:15pm for Midday Prayer with the Dominican Friars at the Dominican House of Studies. Father James Junipero Moore, O.P., welcomed everyone in the chapel and explained some of the Dominican traditions that were manifest in the liturgy. One example was that the alternatim practice of praying the psalms includes alternate standing and sitting. Standing represents preaching, while sitting represents the reception of preaching. Following Midday Prayer, Father Moore conducted a brief concert sung by the Schola Cantorum of the Dominican Friars. Repertoire included the Dominican Hymn O spem miram (plainsong), Sancta et immaculata by Francisco Guerrero, and Salvation is Created by Pavel Tchesnokov. One of the singers in the schola is an expert in Church Slavonic, so the friars learned the text and sang it in the original language. Father Moore indicated that only 2-3 of the friars were music majors, and that they only rehearse for one hour per week. Lunch followed at the National Shrine.

At 2pm, Father Moore gave a talk titled, “The Spiritual Life of the Musician,” in the Dominican Rosary Chapel of the National Shrine. Among the many exhortations he made to the conference participants, Father Moore encouraged everyone to maintain an active prayer life and to avoid the sins of pride and being underprepared. The afternoon continued with the first of two business meetings, during which Anthony DiCello presented the proposed schedules and locations of upcoming CRCCM gatherings. He also described the duties and the rotation process of the steering committee. Marc Cerisier, Organist of the Cathedral of the Immaculate Conception, Memphis, TN, demonstrated updates to the CRCCM website and reminded everyone that service leaflets, compositions, and other resources may be uploaded for sharing among CRCCM members. DiCello presented his project of setting the collects of the Roman Missal (3rd edition) to modern notation. These documents are available for PDF download on the website of the Athenaeum of Ohio (http://www.athenaeum.edu/liturgicalresources.aspx).

Following the Business meeting, Richard Fitzgerald led a session on improvisation techniques on the South Gallery Organ of the National Shrine. Richard’s doctoral dissertation at the Peabody Institute focused on the topic of improvisation techniques; he shared original musical examples as well as templates from organ literature, which can provide the basis for improvisation in liturgy. Workshop participants included Ricardo Ramirez, Director of Music and Organist at Holy Name Cathedral, Chicago, IL; Joseph Balistreri; and Brian Gurley. Conference participants enjoyed food and fellowship at the Washington Court Hotel Lobby and Bar during a specially arranged Happy Hour.

The first event of the morning was a lecture presentation by Bertrand Cattiaux, organ builder and Curator of Organs at the Cathedral of Notre Dame in Paris, France. Cattiaux surveyed six centuries of French organ building, incorporating audio and visual examples in his thorough presentation. The morning continued with a lecture given by the Reverend Monsignor Kevin Irwin, titled “What We Have Done and What We Have Failed To Do,” focusing on state of liturgical and musical reforms since the Second Vatican Council. Monsignor Irwin invited his audience to consider whether or not the liturgical music prepared in their cathedrals fits the liturgy of the Roman Rite. He proposed a reexamination of repertoires consisting primarily of Protestant hymnody—which tend to be didactic in nature—at the expense of the proper antiphons of the Gradual. Monsignor Irwin is a priest of the Archdiocese of New York and served as Dean of the School of Theology and Religious Studies at The Catholic University of America from 2005-2011. He currently holds the Walter J. Schmitz Chair of Liturgical Studies. His latest book, What We Have Done and What We Have Failed To Do (2014), assesses the liturgical reforms of Vatican II and is available through Paulist Press.

At 3 PM, the conference participants visited Washington National Cathedral (WNC). Director of Music, Canon Michael McCarthy, led a workshop titled, “Techniques for the Choral Conductor,” in the lower chapel of WNC. McCarthy encouraged participants to maintain vocal health and to seek periodic vocal instruction and coaching, which would strengthen their work with their own choirs.

At 5:15pm, Monsignor Rossi celebrated Mass and preached in the Crypt Church of the National Shrine, during which prayers were offered for deceased members of the CRCCM. As is custom, the CRCCM necrology was read during the Universal Prayer. Liturgical music was provided by Peter Latona, Richard Fitzgerald, Benjamin LaPrairie, and the Choir of the National Shrine. Following Mass, the Choir of the National Shrine presented a concert titled, “Moveable Feasts: Sacred Music for the Church Year.” The program included the Epiphany Proclamation for 2014, with repertoire selected for each feast. Repertoire included works by Whitacre, Dove, Palestrina, Lukaszewski, L’héritier, Allegri, Stanford, Mendelssohn, Harris, Byrd, and Vierne (organ). Peter Latona conducted the Choir, and Benjamin LaPrairie accompanied from the Crypt Church’s 1987 Schudi Organ.

Thursday morning began with the second of two Business meetings, held in the chapel of the Theological College of CUA. Gerald Muller, Director of Music at the Theological College (TC), described the musical and liturgical formation of the seminary students. During the meeting, participants suggested possible programs or scholarships that CRCCM could fund and oversee. These would be especially focused on the formation of future church musicians. Additional agenda items included the nomination of CRCCM members to the steering committee, as well as further discussion of possible locations for future conference meetings. The Business meeting was followed by the Composers Reading Session, also held in the TC Chapel. Participants were joined by members of the Choir of the National Shrine to read through new compositions.

Later Thursday morning, Grayson Wagstaff gave a lecture-presentation on the influence of the Spanish Renaissance on the sacred music of the New World. Wagstaff surveyed the latest scholarship on the topic, which has attracted the attention of many musicologists in recent years. He discussed evidence of Spanish Salve services, which were devoted to the Blessed Virgin Mary and resulted in a great number of settings of the Marian votive antiphon Salve Regina. Wagstaff encouraged the continued pursuit of this scholarship, since it presents an opportunity to help people appreciate historically important music that is intimately tied to Hispanic liturgical, musical, and cultural heritage. Grayson Wagstaff is Professor of Music, Director of the Latin American Music Center, and Dean of the Benjamin T. Rome School of Music at CUA.

In the afternoon, Johann Vexo, Choir Organist at the Cathedral of Notre Dame, Paris, presented a survey of Sacred Liturgical Music at Notre Dame. He described the responsibilities of the organists, the singing practices at Cathedral liturgies, and the Choir School. Later that evening, Vexo played a brilliant program of French masterworks on the organs of the Upper Church at the National Shrine; repertoire included music of Vierne, Franck, Dupré, and Duruflé. Prior to the concert, Robert Grogan, Carillonneur and Organist Emeritus of the National Shrine, gave a prelude concert on the carillon of the Knights of Columbus bell tower.

As a 501(c)(3) non-profit organization, CRCCM is supported by your contributions in addition to our membership fees.  Your contribution helps us to further the mission of the organization—engaging in dialogue, reflection, deliberation, resource exchange, mutual support, and ongoing professional development for cathedral musicians in particular, and as a model for the Church-at-large.